Next: Angel of the Sand 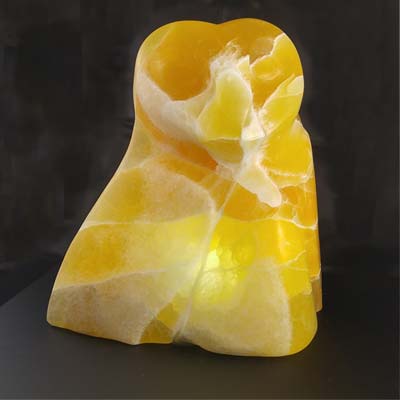 The original stone was a triangle shape and one side was flat. Somehow an idea of owl came to me, even though I've never seen an owl in person. I knew it is a symbol of knowledge, and learning etc. in Japan. I saw many owl design items like a little key chain, owl pattern clothes/bags etc., but always they were illustrations drawn by simple lines.

The first thing I did was to Google owl photos. Looking at many photos of many kinds of owls from many angles helped me to know about their shape. I could get an image of this bird, which would be my image probably. The other information like where they live, how they spend their time, what kind of traits they have helps me to create "my owl image".  Even when I make an abstract or deformed shape of some animal, I definitely want to know its real shape and status.

Sculpture is 3 dimensional art. When I think about it mathematically, it is a huge amount of data. If I take a photo for every degree around it, I need to take 360 photos ( to make it simple, let's regard that one degree is the minimum unit !). And if I look at the object from one degree higher than the hight I took 360 photos, looking down on it, I need to take 360 photos again, and I need to repeat it until I look down it from the top of it....... Of course I don't think in that way when I make a design and when I am carving. But often it is a challenge to make a sculpture piece which I can be satisfied with from any angle.

I think the size of a sculpture could be an important factor for its design and its stone. This owl piece is small and I like it in that size. If it were 2 ft high, which could be a actual large owl size, I don't think the sculpture piece would look cute. I think any sculpture design has its best size, or some size range, which is usually narrow.

Also the place the sculpture will be displayed could affect to its design, or it should be in proportion. A great example would be "David" by Michelangelo, one of the greatest and most beautiful sculptures in the world. Even though it is such an accurate expression of a human body anatomically, the ratio of his head and upper body is larger than the lower body. However it is said that the statue was made to be installed on a high pedestal, so that its balance looked the best when the people look up at it from a lower position.

The back side of this owl piece is flat. The original stone had the area where the stone had been cracked naturally by a blade's cut from the both sides. A stone surface cracked without using a cutting tool has special beauty. There are many crystals you can see. Such a natural surface can't be created artificially. It is just like you break a large piece of chocolate into two and the surface comes out as rough. The cracked surface is very different from a surface cut by knife. So I left that part at the back of the piece.

An owl is a pet who delivers mail even without an address in Harry Potter. I think that "Yellow Guardian" would deliver a peaceful night on a night table.